Stuttgart/New York. By winning the doubles title at the US Open in New York, Laura Siegemund has celebrated her biggest career success since claiming the 2017 Porsche Tennis Grand Prix. In a top-class final at the Grand Slam tournament on Friday, the Stuttgarter teamed up with the Russian Vera Zvonareva to beat the Chinese/American pairing of Yifan Xu and Nicole Melichar 6-4, 6-4. She became the first German doubles winner in Flushing Meadows since Claudia Kohde-Kilsch 35 years ago. For Laura Siegemund, it was already her second success in New York as she won the mixed doubles together with the Croatian Mate Pavic in 2016.

“It’s an unbelievable feeling to win a Grand Slam title,” said the Porsche Team Germany player after Vera Zvonareva had converted the first match point after 79 minutes. “The US Open with Vera was a fantastic experience. We can be proud of our performance.”

The two competed together in New York for the first time as a doubles team. They nevertheless performed impressively even though communicating in these corona times was none too easy. “Luckily enough, we understood each other so well without many words,” said Laura Siegemund. “At the changeovers, we sat three metres away from each other on the bench. If we had discussed our tactics from the distance, it would have been as if we were inviting our opponents to join in.”

On the way to the final, they knocked out some of the favourites for the title. In the second round they overcame the Grand Slam winners Viktoria Azarenka and Sofia Kenin (Belarus/USA). Later in the quarterfinal they downed the No. 2 seeded title-holders Elise Mertens and Aryna Sabalenka (Belgium/Belarus). A three-set victory against the Russians Anna Blinkova and Veronika Kudermetova earned them a place in the final where they were also not to be stopped by the No. 3 seeds Yifan Xu and Nicole Melichar. Laura Siegemund above all played a big part. With her strong serve, composure and fantastic reactions at the net, she was the dominant player in the final – something Vera Zvonareva highlighted at the victory ceremony: “Laura made me a better player on the court.”

For the Russian, who celebrated her 36th birthday on 7 September, it was already her fifth Grand Slam title. In 2006, she won the ladies’ doubles at the US Open and then in 2012 at the Australian Open. She was successful in the mixed in New York in 2004 and Wimbledon in 2006. Vera Zvonareva, who gave birth to a daughter in 2016 and then returned to the professional tour, has also appeared several times at the Porsche Tennis Grand Prix in Stuttgart. She reached the quarterfinals in 2008 and 2011. The last time she played in the Porsche Arena was in 2019. 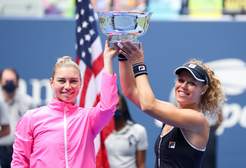 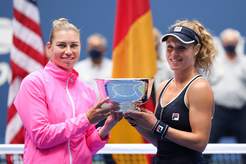 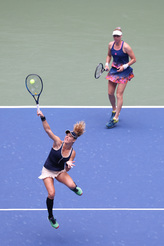