2016, the most successful year in the history of Porsche

Stuttgart. A clear step forward for Porsche in terms of results and returns: In the 2016 financial year, Porsche AG achieved record highs in terms of deliveries, revenue, operating result and number of employees. Deliveries increased by six per cent to 237,778 vehicles, thereby achieving a revenue of 22.3 billion euros (almost 24 billion dollars), an increase of four per cent. At the same time, the operating result rose disproportionately by 14 per cent to 3.9 billion euros (almost 4.4 billion dollars). Return on sales experienced particularly impressive growth, increasing from 15.8 per cent (2015) to 17.4 per cent. By the end of 2016, Porsche's workforce had grown by 13 per cent to 27,612 employees.

The Chairman of the Executive Board of Porsche AG, Oliver Blume, expressed his thoughts at the annual press conference in Stuttgart-Zuffenhausen: “The successful annual financial statement attests to the quality of our strategy. Porsche represents value-creating growth. We're concentrating on delighted customers, solid returns and secure jobs.”

Lutz Meschke, Deputy Chairman of the Executive Board and Member of the Executive Board for Finance and IT, stressed: “With a profit margin of over 17 per cent, Porsche continues to be among the most profitable automobile manufacturers in the world. The key to this achievement is our unique range of products and our healthy cost structure.” The long-term currency hedging strategy also made an important contribution to the record result. “We expect to see moderate growth in terms of deliveries and revenue in the current financial year of 2017, despite the continuing economic and political uncertainty in various regions of the world. In terms of operating result, we're striving to match the value of the previous year, provided that exchange rates remain stable”, Meschke continued. “We will gain impetus from the new Panamera, particularly with its plug-in hybrid versions and the Sport Turismo”, Blume stated.

Porsche is preparing for the mobility of the future. As a result, research and development expenditure was deliberately increased, so that in the 2016 financial year, the figure rose to 2.2 billion euros (almost 2.4 billion dollars). The sports car manufacturer is investing in the development of new plug-in hybrid vehicles and the purely electric Mission E vehicle, as well as in digital transformation. Meschke: “Digitalization is more than an investment in the latest technologies. It opens new economic opportunities, increases customer benefits and makes processes more efficient.” In 2016, the company founded Porsche Digital GmbH in Ludwigsburg and the Digital Lab in Berlin. Porsche also took a stake in the venture capital fund e.ventures and the parking service provider Evopark. “In the medium term, we want to generate a double-digit percentage of sales through digital services”, said Meschke.

“In line with the Porsche Strategy 2025, we're preparing the company for the future”, stated Blume. “At Porsche, the mobility of the future is as much about new technologies and electrification as it is about purist, emotive sports cars”, the Porsche CEO explained. “We are emphasising our tradition and shaping the sports car of the future.”

2016, the most successful year in the history of Porsche 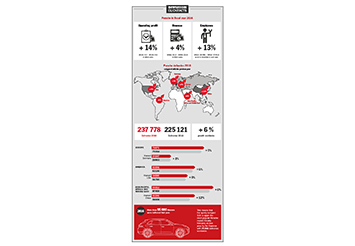 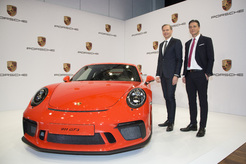 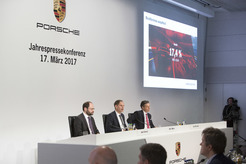 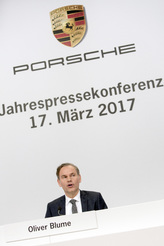 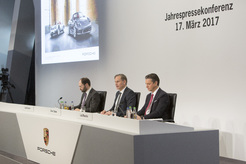 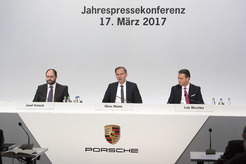