Stuttgart. It was a success Petra Kvitova has had to wait a long time for. In front of a capacity 4,400 crowd in Stuttgart’s Porsche Arena on Sunday, the Czech finally won the Porsche Tennis Grand Prix at her seventh attempt. In a high-class final, she defeated Estonia’s Anett Kontaveit 6-3, 7-6(2) to earn herself a Porsche 911 Carrera 4S Cabriolet as the main prize. The win has also extended her Porsche Race to Shenzhen lead, the official qualification ranking for the prestigious WTA Finals in the Chinese high-tech metropolis in November.

“This car is a big bonus”
Petra Kvitova has broken the spell. She is the first player on this year’s WTA Tour to win a second title. Her first came in Sydney in January. In the Stuttgart final against the impressive Anett Kontaveit, she had to summon up all her experience to fulfil her dream of a Porsche Tennis Grand Prix win. The left-hander won the first set comfortably and eventually secured the title on her third match point in the second set tiebreak.

“I’ve already lost a few tiebreaks against Anett, so I’m really happy that everything worked out today,” said Petra Kvitova, who has replaced the Romanian Simona Halep as the new world number 2 by winning in Stuttgart. “After failing six times, I’ve finally won this fantastic tournament. This car is a big bonus.”

In order to watch Anett Kontaveit, a very popular sportsperson in Estonia, for herself in the final, radio reporter Maarija Värv travelled today from Tallin to Stuttgart. The journey was well worth it as Anett Kontaveit put on an excellent showing even though she still has to wait for her second WTA title after s’Hertogenbosch in 2017. The Porsche Arena’s Centre Court is a good venue for her: quarterfinalist in 2017, semi-finalist in 2018, runner-up in 2019. “I was nervous at the start but then I found my game in the second,” she said. “Stuttgart is a special place for me. I look forward every year to playing in front of the crowd here.”

German pairing claims doubles title
Big success for Porsche Team Germany players Mona Barthel and Anna-Lena Friedsam –as the wild card pairing claimed the doubles title. Playing the favourites Lucie Safarova (Czech Republic) and Anastasia Pavlyuchenkova (Russia), they started off by quickly losing the first set 6-2 but came back strongly in the second to take it 6-3 and force a champions’ tiebreak which they won 10-6.

“It was an unbelievable week. It was the first time that we’ve paired up and the crowd supported us so fantastically. It was a whole lot of fun,” said Mona Barthel, who, together with Sabine Lisicki, also won the doubles at the Porsche Tennis Grand Prix back in 2013. Anna-Lena Friedsam added, “Our personalities gel together. It’s certainly not going to be our last tournament together.”

There was a tinge of sadness at the victory ceremony as the tournament bid farewell to Lucie Safarova. The former Top 10 player, who will retire next week at the event in her home city Prague, has also written history at the Porsche Tennis Grand Prix. In 2014, she played out an unforgettable marathon match lasting three hours 23 minutes against Maria Sharapova in the first round which she lost in three tiebreak sets. “I’ve always loved coming to Stuttgart,” she said, “It’s a fantastic tournament. I’ll definitely be coming back – but as a spectator.”

Aces for a good purpose
The Porsche Tennis Grand Prix once again supported charitable organisations this year through its Aces for Charity campaign whereby Porsche donates 100 euro for every ace hit during the course of the tournament. A total of 212 were struck in 2019 – and Porsche rounded up the donation to 30,000 euro. The sum was split equally between the Stiftung Agapedia foundation that cares in a variety of projects for needy children and the “Landessportverband Baden-Württemberg (LSV BW) sports association. The cheques were handed over on Centre Court by Andreas Haffner, Member of the Executive Board Human Resources and Social Affairs, Porsche AG. Both charity partners were represented by famous ambassadors from the world of sports. Representing Agapedia was the former German international footballer Kevin Kuranyi and the three-time wrestling world champion Frank Stäbler took receipt of the donation for the Landessportverband Baden-Württemberg.

Positive review
“It was a very intensive week. The Easter period and the beautiful spring weather didn’t make it easy for us. However, our spectators have remained loyal and the Porsche Arena was sold out on most days. The Stuttgart crowd is one of the world’s best,” said Tournament Director Markus Günthardt when reviewing the tournament on Sunday before the final. Anke Huber, the Operating Tournament Director, said, “We’ve seen top class tennis the whole week here,” The WTA President Micky Lawler was also full of praise: “The Porsche Tennis Grand Prix is one of the favourites of all the players and you can see why once again. It was a sensational week. So, it’s very sad that it’s Sunday and that we have to wait another year to come back to Stuttgart.”


911 Carrera 4S Cabriolet: fuel consumption combined: 9.0 l/100 km; CO2 emissions combined: 207 g/km.
The consumption and CO2 emission values were determined in accordance with the new Worldwide Harmonized Light Vehicle Test Procedure (WLTP). The NEDC values derived from this should continue to be specified for the time being. These values cannot be compared to the values determined in accordance with the NEDC measuring procedure used up to now. 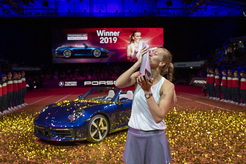 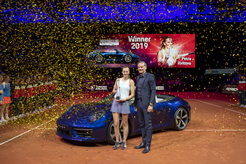 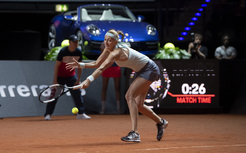 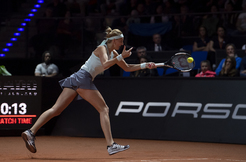 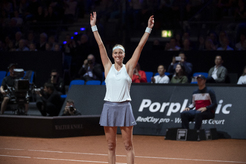 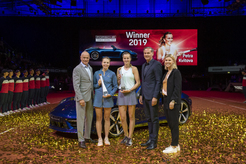 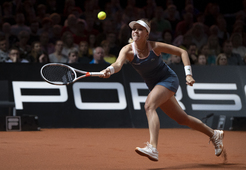 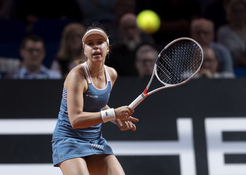 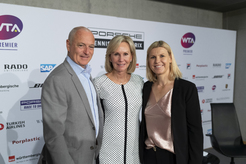 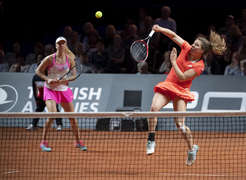 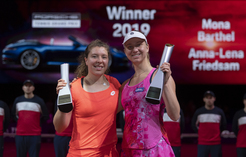 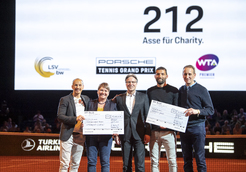 T19_0480: Porsche Tennis Grand Prix 2019: handing over the Aces for Charity cheques with Andreas Haffner (Member of the Executive Board Human Resources and Social Affairs, Porsche AG/middle) and the charity ambassadors Frank Stäbler (LSV/l) and Kevin Kuranyi (Agapedia/2nd from r)
2019/04/28

Porsche Tennis Grand Prix 2019: handing over the Aces for Charity cheques with Andreas Haffner (Member of the Executive Board Human Resources and Social Affairs, Porsche AG/middle) and the charity ambassadors Frank Stäbler (LSV/l) and Kevin Kuranyi (Agapedia/2nd from r)